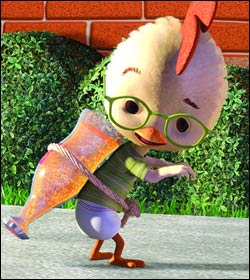 Saw the shorts for Chicken Little and Happy FeetÂ  and while I don’t expect too much from animated CGI movies it felt as if both flicks were constructed entirely around cute dancing animals that I imagine could be downloaded onto a phone or used in an internet banner of some description.

Crazy Frog mediascape? “Crazy Frog” is the purest expression of an event-commodity in an immaterial labour market. Constructed from two amusing, but forgettable amatuer creative works it is now on the verge of cascading into a fully blown synergasm.

Crazy Frog is the marketing title of a ring tone based on ‘The Annoying Thing’, a computer animation created by Erik Wernquist. Marketed by the ringtone provider Jamba! (known as Jamster! in some markets), the animation was originally created to accompany a sound effect produced by Daniel Malmedahl while attempting to imitate the sound of a two-stroke moped engine. The Crazy Frog spawned a worldwide hit single with a remix of “Axel F“, which reached the number one spot in the UK, Australia and most of Europe. The album Crazy Frog Presents Crazy Hits and second single “Popcorn” continue to enjoy worldwide chart success. The Crazy Frog has also spawned a range of merchandise and toys which look to be very popular for Christmas 2005. Negotiations are also underway for a TV series based on the character.

You can see what I mean on the Chicken Little Disney website where there is a selection of dance moves available on the right hand column. Plus here is the Happy FeetÂ official website where you can see the teaser trailer.

Cute dancing animals? Why? What have we done to deserve this? Don’t give me no post-fordist “you are not in the target market” defence of these commodified memes. It is just shit. Little indication there is a story, little indication of how such a story would engage kids. Chicken Liittle is actually a story everyone knows, but instead of teaching kids about not lying so as to impress people (or go to war), apparently the ‘message’ of the movie is that it suggests that parents should be taught to listen to their kids!!! WTF? Yes, listen to your children so they can buy $3 ring tones and mobile phone themes… Or perhaps it is listen to your ‘inner-child’ so you go eat McDonald’s and become a fully incorporated consumer citizen.

Synergasm? An orgasmic synergy experience. Talk about ‘non-places’, Crazy Frog exists in the space produced entirely through the reflex-giggle of cross-promotion. That is, it is sustained by the interest of others. This is a relation of alterity determined by an other’s enthusiasm. You don’t like it, but someone else bloody must. Actually, “like” is too strong a word, it is a captured affect of interest-excitement on a trajectory of pure speed. The only cultural ‘mass’ behind Crazy Frog’s mass-culture momentum is the story of its differentiation. An animation from here, a soundtrack from there, and exploitation from this mobile phone company.

The Crazy Frog mediascape is different to previous reconfigurations of the media cross-promotional landscape because cereal packaging or fast food happy meals or whatever can only incorporate the spectacle’s media-meme so much before they cease being a cereal packaging or fast food happy meal. Mobile phone video clips, for example, do not change the nature of Crazy Frog, or, as I am arguing, the nature of Chicken Little or Happy Feet as they have been produced in the networked synergastic circle-jerk where the mobile phone video clip is the lowest common denominator. (Well in a ratio of consumer credit versus mass-sales it is anyway…)