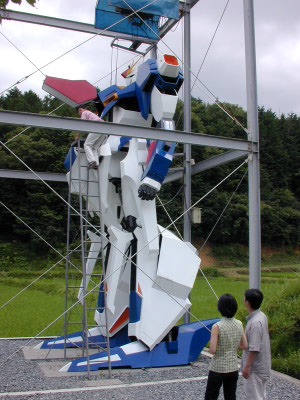 A high-tech armament system for infantry soldiers sparked interest among anime fans at a recent Ministry of Defense research presentation when officials announced that it was designed with the Gundam anime series in mind.

The Advanced Personal Armament System — Japan’s version of the Future Soldier project, designed to modernize combat infantry units — offers a network-linked helmet providing night and thermal vision, amongst other capabilities. It was introduced at a presentation held by the ministry’s Technical Research and Development Institute titled, “Towards the realization of Gundam.”

Gundam is the name of a hugely popular anime series featuring huge “mobile suit” robots, and the system unveiled at the research presentation sports features inspired by the giant humanoid robots that appear in the anime “Mobile Suit Gundam,” according to officials.

In light of the system’s tracking capabilities, some have suggested that the former administrative vice defense minister should have tried the equipment on.

84 replies on “Towards the realization of Gundam”