Jean has posted a link to this rather cool slice of the dicethrow: F.M. Conford’s famous 1908 satire on university politics. My favourite avatar is the “Young Man in a Hurry.”

The Young Man in a Hurry is a narrow-minded and ridiculously youthful prig, who is inexperienced enough to imagine that something might be done before very long, and even to suggest definite things. […] They meet, by twos and threes, in desolate places, and gnash their teeth. […] Political influence may be acquired in exactly the same way as the gout; indeed, the two ends ought to be pursued concurrently. The method is to sit tight and drink port wine. You will thus gain the reputation of being a good fellow; and not a few wild oats will be condoned in one who is sound at heart, if not at the lower extremities.

One of my favourite passages in this little pamphlet is the following:

Another argument is that ‘the Time is not Ripe’. The Principle of Unripe Time is that people should not do at the present moment what they think right at that moment, because the moment at which they think it right has not yet arrived.

Finally, there is a cosmological inverse to Van Halen‘s most philosophically mind-boggling of big-hair lyrics:

Only time will tell,
If we’ll stand the test of time.

It struck me as I was reading Conford’s satire that I had heard of someting of similar satirical stature, but attacking the ‘media’ wannabe’s ‘who genuinely deserve to die.’

Nathan Barley is a six part show produced for BBC 4. It is based on spoof TV show called Cunt that was originally published on a website (Google cached) about spoof tv listings (which itself became a tv show, haha). From the official website for the show:

Nathan Barley is 26. He is a webmaster, guerrilla filmmaker, screenwriter, DJ and in his own words, a “self-facilitating media node”. He is convinced he is the epitome of urban cool and therefore secretly terrified he might not be, which is why he reads Sugar Ape Magazine – his bible of cool.

Fuck. The original series of spoof listings is some nasty shit. Here is an example: 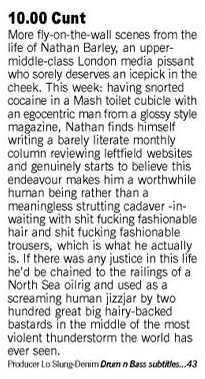 I am glad my thing is car stuff… and I am doubly glad I didn’t let a certain ex-girlfriend, in spite of her best efforts, turn me into a Cunt-simulacrum. Edit: [removed] Edit: [sigh] I can’t be a cunt even when I want to be.

5 replies on “Microcosmographia of Cunts”